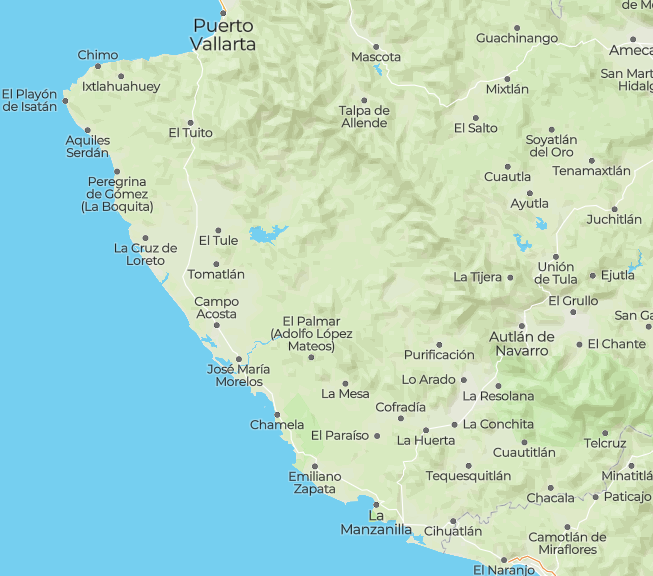 Listed South to North
COLIMILLA
The village of La Culebra (better know as Colimilla) is directly across the lagoon from Barra de Navidad. It is widely known for suburb dinning experiences at it's lagoon-side restaurants.

BARRA DE NAVIDAD
The most southerly seaside town of the Costalegre, Barra is a seaside community of fishermen and farmers.  It is popular in winter as a quiet vacation destination for adventurous North Americans.

SAN PATRICIO MELAQUE
Just 4.5km to the north of Barra, are the tri-villages of Melaque, San Patricio and Villa Obregón.  Melaque is a popular tourist area because of the abundance of accommodations and restaurants.

CUASTECOMATE
Four km northwest of Melaque lies the secluded cove and beach of Cuastecomate. A great spot for snorkeling, swimming or sunbathing.  Many people are surprised by the dark sand here.

LA MANZANILLA
This tranquil little fishing village and beautiful crescent shaped beach is 21km north of Melaque.  When traveling north it is the first seaside pueblo on the large bay of Tenacatita.

BOCA DE IGUANAS
The wide open beach area of Boca de Iguanas is popular for its serenity and seclusion.  People who like to camp or RV in an isolated place with few amenities would like it here.

TENACATITA
Tenacatita is a beach on the north side of the Bahía de Tenacatita.  This area was once known for wilderness camping spots along the beach.  There is currently a dispute over who owns this pristine area.  Swimming, snorkeling and sunbathing are great here.

EL TECUÁN
El Tecuan is an abandoned hotel 9.6km off the highway at mile marker 33, just 5.5 km north of the junction for playa Tenacatita.  This area was once owned by a Mexican military general.

CAREYES
Costa Careyes is a resort and residential area surrounding Bahía Careyes.  Luxury resorts and condominium developments are located here.  The area is famous for its turtle nesting beaches.

CHAMELA
Bahía de Chamela is 72 km north of Melaque.  The village of Chamela is located on the southern end of this large picturesque bay, which has numerous off shore islands.

PERULA
Punta Pérula is a beautiful isolated beach pueblo on the northwest end of the Bahía de Chamela.  Pérula once marked the northern end of the Costalegre costal area, but now includes all the coast of Jalisco state.

TOWNS ALONG MEX 200
There are many small pueblos situated along the coast of Jalisco between Cihuatlán and Puerto Vallarta.  Some are on the highway and others a short distance away on gravel roads.  Most of these towns are not set up for visitors as they have few accommodations, but all have tiendas for food and drinks, and some have taxis & telephones.

INLAND PLACES
Toward Guadalajara on Mex 80 there are numerous towns and villages to explore.  Towns worth mentioning are the colonial town of Cocula, which is famous for the birthplace of Mariachi and Autlán birthplace of Carlos Santana.